After a relaxing day yesterday we were ready and firing to go to Lobuche. It had been a long afternoon yesterday and most of us were just eager to get even further into the trek. We left Dingboche around 8am and headed off the same direction as yesterday – up.

Once we climbed a little we walked into a huge valley which appeared to be a massive wind tunnel. The fierce gales of wind were enough to blow you into Tibet. We settled into single file and hiked in silence with our heads down, suddenly wishing we were back in the cosy lodge in Dingboche. The views around us were simply stunning (I didn’t want the day to come where I became blasé about these mountains) but the vicious winds meant keeping my head down and pushing onwards. We hiked this way for about two hours and by the time we were out of the windy valley I was exhausted. We crossed a very hairy looking bridge and had a break in a small village wedged into the mountain, safely out of the wind.

Staying here for an hour, Krishna allowed us to go on while he waited for the final members of the group to arrive. The six of us who had been sticking together the whole time (the Super Six, thank you very much!) marched off ready to tackle the next part of the trail – a brutal uphill climb to Chukla Lare where there is a memorial for all those who never made it off the mountain. The uphill stretch was tough as per usual but once it was done, the beautiful views took my mind off my aching legs. it was another perfect, clear day and the mountains around us looked spectacular!

Once we reached the top  at Chukla Lare, we took a break to pay our respects to those who have died attempting to climb Mt Everest. Here lay stone memorials and prayer flags recognising the fallen. It was a sobering moment – here we were thinking we were doing something brave and heroic hiking to Base Camp – yet these unbelievable humans had gone even further and reached (or almost reached) the roof of the world. Reading the headstones, the fact that these people once stood where I stood really hit home. One headstone in particular stuck out to me of a young woman climber. I’m not sure whether it was because it was the only headstone for a woman I could see, or the fact that she had actually summitted Everest and had passed away on the way back down but it stayed on my mind for the rest of the day. I’d come into this trek with not much knowledge about the mountain, other than it was the highest in the world and to learn so many people had lost their lives was extremely sad. There is so much respect to be had to these trekkers and their dedication to climbing. They devote their whole life to trekking and it return the mightiest of mountains takes their dedication away. It made me realise not only how hard trekking and climbing actually can be and it doesn’t matter how passionate you are about it, the mountains always have the last say. 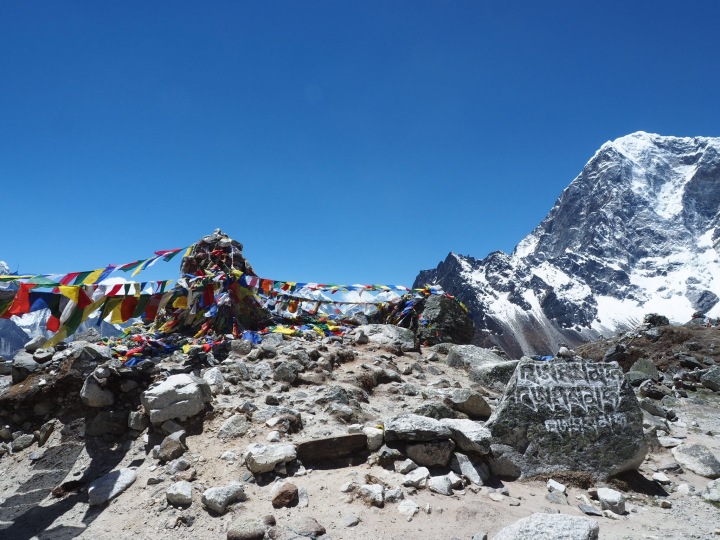 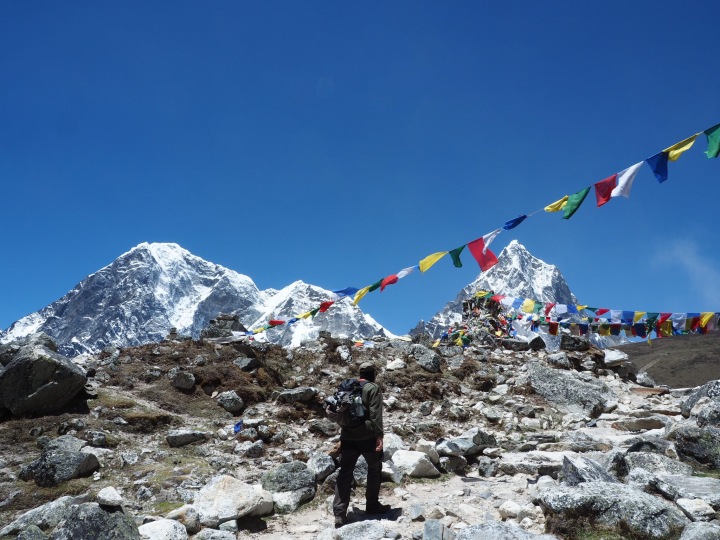 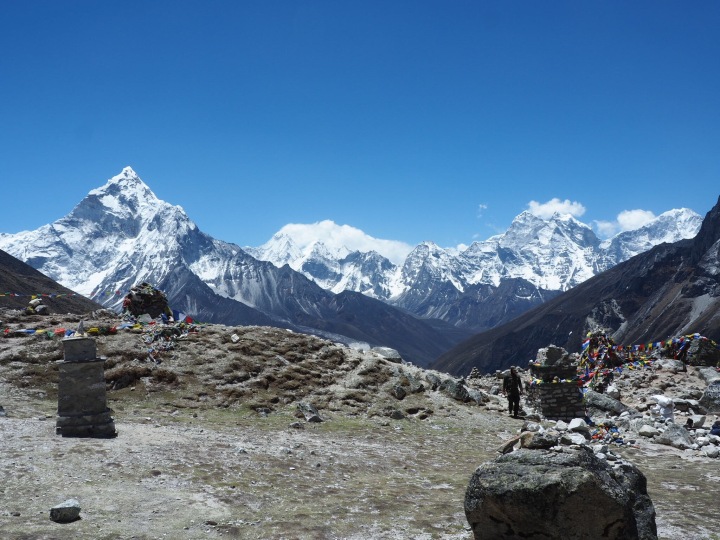 We stayed there for awhile before deciding to head on to Lobuche. We walked again in single file, immersed in our own thoughts. I think I wasn’t the only one affected by the memorial. The last stretch to Lobuche was not a good time. While it was only ‘Nepali Flat’ (small hills) I couldn’t find the energy to keep walking. It was hard because Lobuche was nowhere in sight and it felt like we were in the middle of nowhere. Every step was a battle and I felt like I was hungover (except 10x worse) Was this the beginning of altitude sickness? I hoped not, but slowly made my way to Lobuche along with the others.

We’d long left the green, forest coated mountains and were now amongst the monochromatic colours of wind-blown rocks and ice. Like we’d stepped on another planet, the hundreds of thousands of stones had made for an ankle-breaking walk but provided a more dramatic and unique view than what we’d been seeing for the past few days. It was definitely starting to feel like we were high in the Himalayas.

After about two hours we came around a corner and finally, finally Lobuche came into sight! At 4930m above sea level I’d never been happier to see a small dingy village! We found our lodge and ordered lunch straight away. My mood was turned around instantly when i discovered they had peanut butter on the menu! I ordered vegetable soup and peanut butter on toast. The other two Aussie girls went crazy for the peanut butter as well, much to the confusion of the Brits and the Germans! Feeling a tonne better after eating, I was more positive about the rest of the hike.

It was another early night for the group. Tomorrow we had an early start to hike to Gorak Shep and then on to BASE CAMP! Now the fun begins!