After a bit of a restless night due to Mr Snorelax in the bed above me, I gave up trying to out sleep my alarm and got ready and headed to the airport early. Today I am off to Nepal, which is exciting but slightly terrifying! Before I landed in Nepal I had a six hour layover in Kuala Lumpur to sit through. I had plans to go into Kuala Lumpur and have a look around but my bad sleep last night and sore legs from yesterdays scooter efforts I made the executive decision to sloth about the airport.

Slothing about the airport is all fun and games until its four hours in and you’ve walked through the entire airport, listened to every song on your iPhone and sampled every single perfume in the duty free shops. Thankfully KL International Airport had unlimited wifi so at least I was able to waste time on social media. Finally,  at 5:30pm we started to board and the reality of heading to Nepal was becoming a little daunting. I was flying with the Malaysian airline Malindo Air, which was quite nice but I was deadset the only Caucasian on the plane. I think there is a lot to be said about the Western world and their standards of safety. Whilst I think some of the rules back home are a bit silly, my inner Westerner definitely felt nervous as the other passengers around me completely ignored seatbelt signs through rough turbulence, pushed and shoved to the front of the line and showed little respect for the air hostesses. Thankfully I made it to Kathmandu in one piece but happy to be on solid ground! The arrival into Kathmandu however was quite easy. Despite the constant stares, the Nepalese aren’t sleazy at all like other men from different cultures. They were happy to help me without trying to rip me off or make a pass. My guard was up from past experience but I think it was slightly unnecessary.

The drive to the hostel was a wild one, we had about four near head-ons but my taxi driver Rhajib was lovely to talk to so I let it slide. I got to my hostel, Alobar1000 Hostel and said farewell to Rhajib. It definitely was a change from the hostel in Singapore! Full of colour and graffiti, it was asthetically pleasing but it was a bit dirty and run down. Though for $7 a night I wasn’t expecting the Hilton, all I wanted was somewhere to be horizontal for a very long time.

I woke the next morning feeling better about life and where I was. After a shower and breakfast on the rooftop terrace of the hostel I was ready to take on Kathmandu. I headed out to the street and with the help of another girl staying at the hostel walked straight into the chaos of Thamel. This tourist neighbourhood was exactly what I expected Kathmandu to be like and suddenly I was excited to be here.

There are no other words for Thamel except chaotic. Actually dirty, busy and dusty come to mind but in all the craziness is there something so attractive about Thamel. It lures you in and you can figuratively (and literally) lose yourself there. Nepalese prayer flags hang from the streets, intertwining with the interesting power line situation that resembled a very messy tangle of earphone cords! Market stall owners called ‘Namaste’ as I walked past, trying to dodge the incoming traffic both on wheels and on foot. Nearly every shop sold some form of hiking equipment alongside the usual touristy trinkets and clothes. I eyed off the cashmere scarves and yak wool blankets which would definitely find a place in my backpack somewhere.

I wandered around and around Thamel until all the market stores starting blurring together so I took a break for lunch at Greens Organic Cafe where I feasted on Nepalese vege curry with fresh naan bread. (Honestly I would have been happy with just the naan haha, it was SO good!)
After refuelling myself I was ready for a bit more sightseeing. I took a taxi up to Swayambhunath or better known as the Monkey Temple for a squiz around. Perhaps a little more research wouldn’t have gone astray here as the windy taxi ride up the hill to the temple took me outside the tourist area and its the slums of Kathmandu. It was fascinating to watch the locals go about their everyday life. The run-down, partly built buildings were covered in old signs with a mix of English and Nepalese. Stray dogs slept where they pleased and small children ran around barefoot, with not a care in the world. We crossed bridge and i looked out to the river that flowed below. Debris and rubbish from rundown houses lined the river and the murky brown water definitely didn’t look appealing. 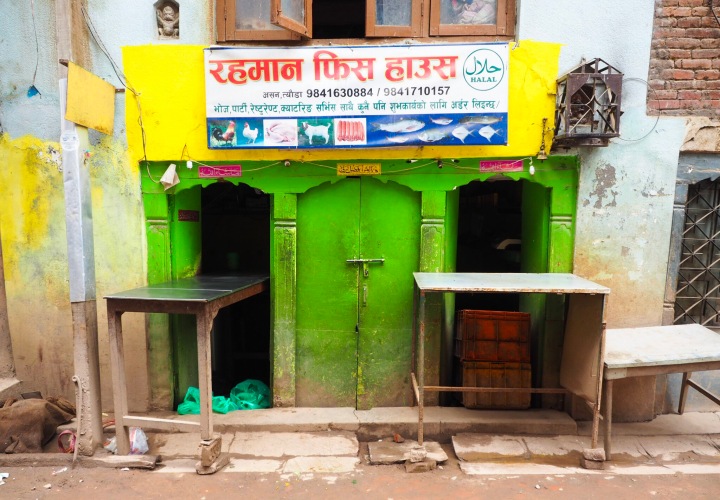 We drove up the hill to the top of the temple and promptly got caught in a traffic jam that didn’t look like it was going to move. Apparently Saturday afternoons were peak time to visit the temple! I got out of the taxi and made my way through the busy crowds. With not a single Caucasian in sight, my blonde hair stuck out like a dogs hind leg but it seemed to work in my favour as the locals made way for me to come through the entrance into the temple.

Swayambhunath is a beautiful Buddhist temple, prayer flags covered the entirety of the temple and swayed in the slight breeze. I walked first to a wishing fountain and watching little kids throw coins into the pile as their parents watched on. As I walked through the busy crowd I got stopped several times for a photo. Once I said yes to one that was the end of it. Out came everyone’s phone wanting a selfie with the strange yellow-haired creature. “One more, one more please!” They asked with a big toothy grin. I could hardly say no to their smiling faces but at this rate I’d be there all night. After what felt like a million selfies, I finally said no more and headed up the stairs to the highest part of the temple. 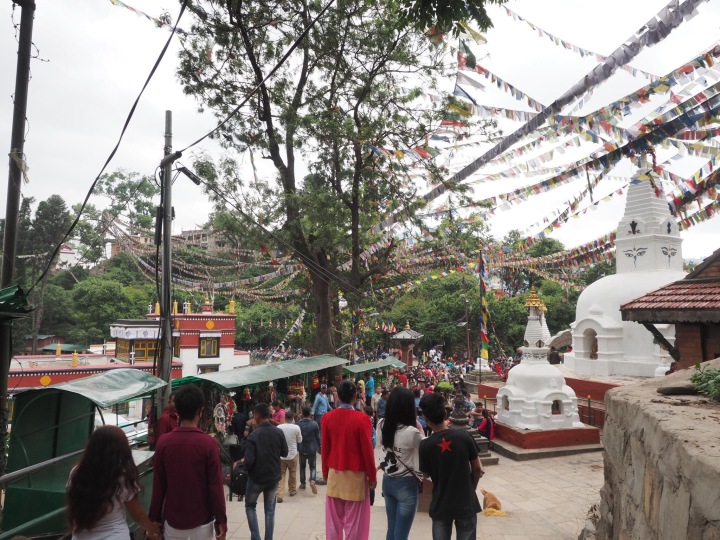 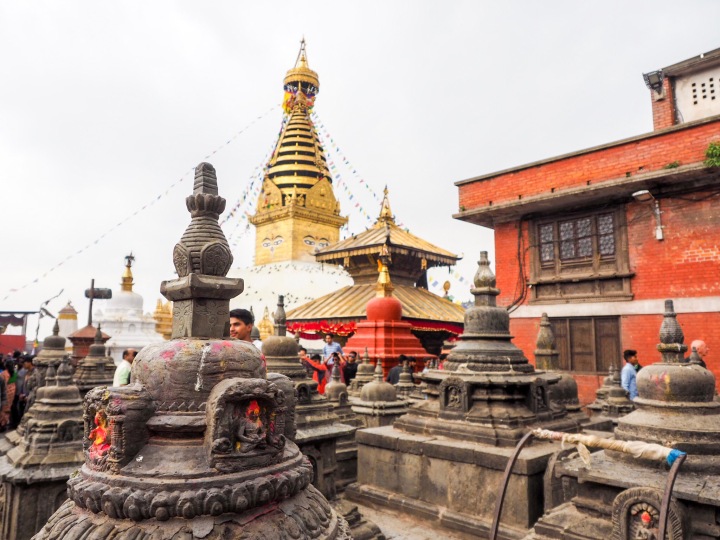 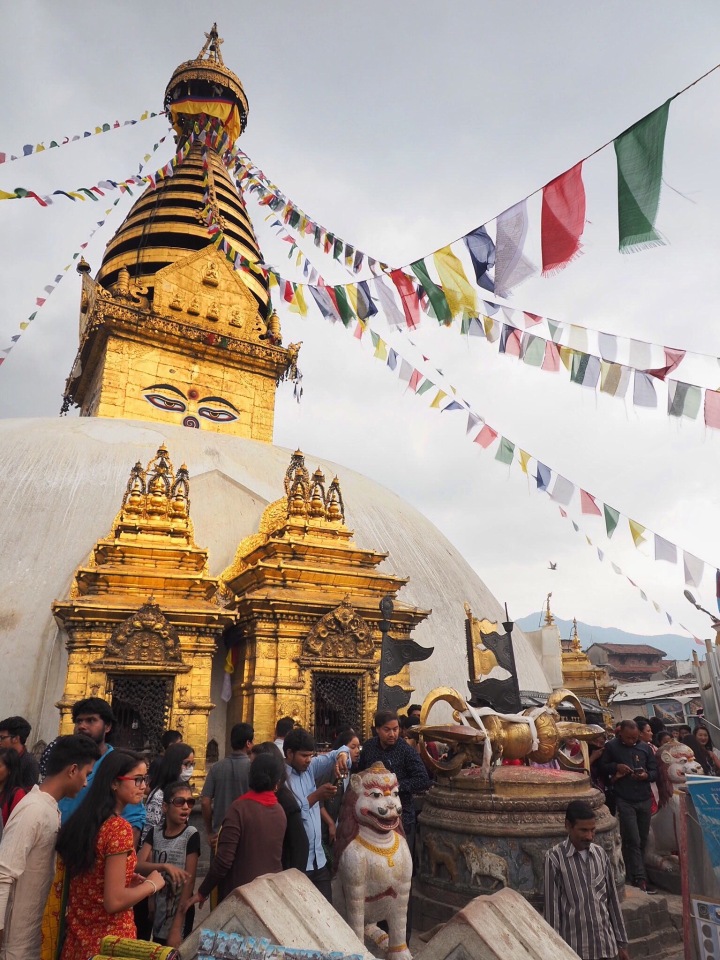 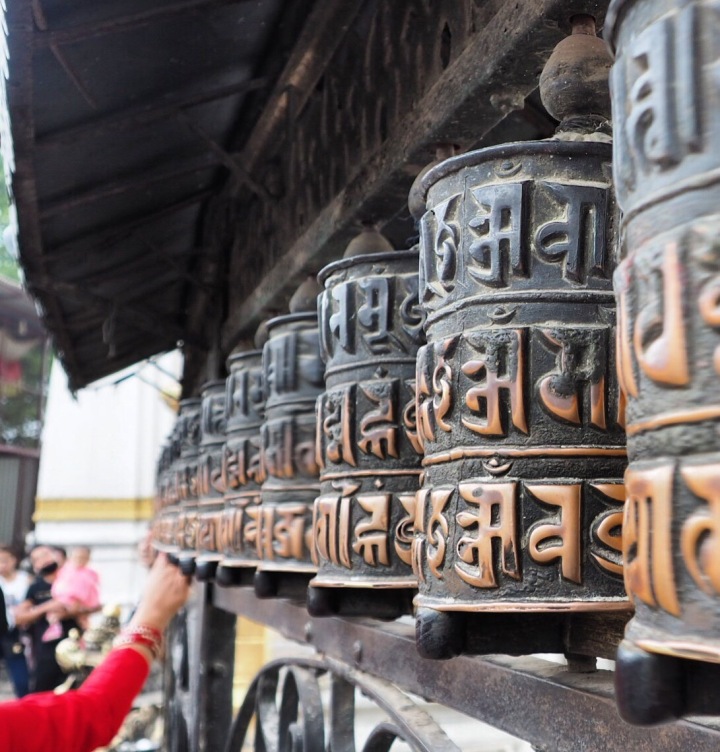 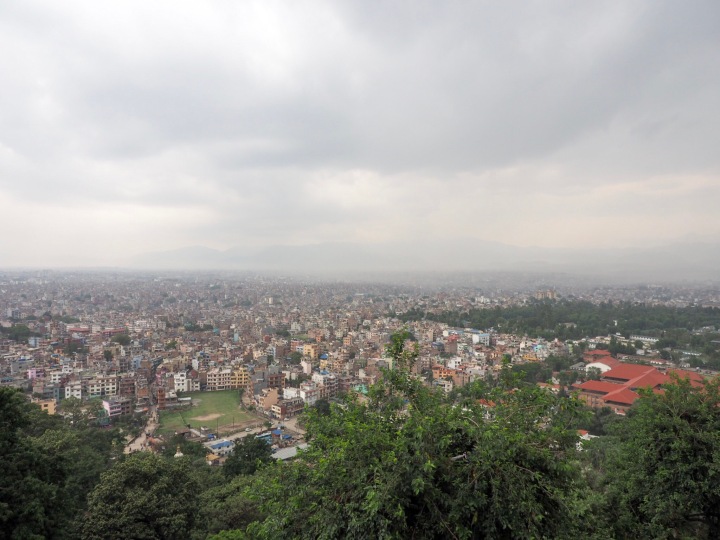 Just as I finished walk clockwise around it, spinning as many prayer wheels as I could I felt a few rain drops on my shoulders. Within seconds the skies opened up and dropped a bucket of rain over us. Rushing to shelter, I huddled in someone’s market stall with about ten other people until the rain ceased.

Not wanting to get caught again I quickly walked around the temple a bit longer before making my way down the steps to the other entrance. I was glad the taxi driver hadn’t dropped me here because it was a steep ascent to the top. After a few more selfies with groups of school girls I managed to get in a taxi and head back to the hostel. 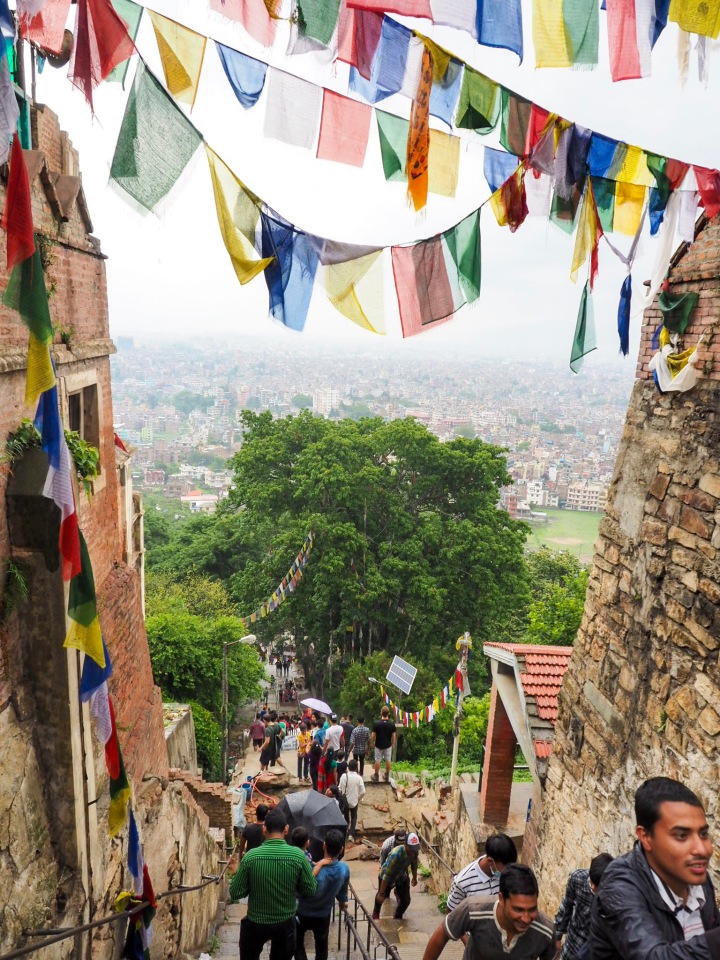 Suddenly feeling tired after my day of wandering around, I decided I needed a sweet pick me-up to earn back some of the calories I’d burnt. Cociendentally there happened to be a lovely coffee shop on the corner of my street so I took it as a sign as spent the remainder of the afternoon inside drinking coffee and people watching.

Tomorrow I move to the next hotel and meet my group for my Everest Base camp trek! I’m excited and nervous but have a good feeling about it all. Wish me luck!