There are many famous sights to see when travelling around Cusco – Machu Picchu, the Inca Trail, the alpacas – but there is one place that hasn’t quite hit the tourist radar yet. And I’m so glad to have experienced it before it has.

Vinicunca (or more commonly known as the Rainbow Mountain) is a particularly astonishing act of Mother Nature just a few hours out of Cusco. It is close by to Peru’s largest mountain Ausengate and is one of those places where a photo – no matter how filtered – will do it justice.

I booked my trip through American Inca Trail in Cusco, who were the same company that I booked my Machu Picchu trip and the ATV-ing with. The owner, German, is fantastic at what he does and ensures you can get the best possible price. A trip to Rainbow Mountain doesn’t come cheap as it’s not a well-known tour and the road to get there is really rough. For a single person to go to Rainbow Mountain with a car and a guide it can cost between $140 – $200, however if there is more than one person on the tour the price can drop to $105. Luckily German had found another guy wanting to go to Rainbow Mountain the same day as me so I didn’t have to fork out so much moolah – though I still would have paid that much to see this natural wonder.

I was picked up from my hostel at the lovely time of 4:30am and driven three hours out of Cusco. The first two hours were smooth and sleep inducing but the last hour however was windy, slow and at times a little scary. We carefully putted alongside the edge of a mountain, which provided us with spectacular views and racing hearts. We passed a small village where the locals were out watching their alpacas and kept driving until we were in the middle of a huge valley. Our driver stopped the car and our guide told us this was the starting point. – the middle of nowhere. Still half asleep, I wasn’t sure if he was joking but obliged and got out of the car anyway.

We loaded our backpacks up and followed our guide across a field until we reached a potato crop growing on the mountain that we had to hike through. It was a direct uphill hike and at 4,000 metres above sea level, it knocked the wind out of me straight away. The altitude hit me like a tonne of bricks and within steps I was dizzy and gasping for air. I hadn’t been affected by the altitude too much before now and was slightly worried that I might not be able to complete the hike.

However as we walked at an steady incline, I managed to continue on. Stopping every set of twenty steps, I focused on not passing out and trying to enjoy the scenery – which even in my altitude-affected state, couldn’t help but be amazed at the view. After an hour (felt like 12) we reached a valley and finally I could breathe properly again. I guess I took for granted the fact that I hadn’t been affected by altitude much in Cusco, it was a horrible thing to fight. We hiked through the beautiful valley, past some small adobe houses with small children running around outside. The silence in the valley was deafening, a pleasant change to the constant noise I’d become accustomed to in Cusco. I don’t know where to start with the scenery – it was just too beautiful. The green carpet of grass that we trod on was lush and thick, every so often fluffy cactus poked out from the ground and small streams diverting many ways kept us guessing on where to step. The huge mountains that surrounded us ranged from colours of black to red to brown and in the distant I could just see the tip of Ausengate and its snow capped peaks. Bar the couple of farmers that were nearby, we were the only people in the valley and it was awesome – like we were discovering something new. 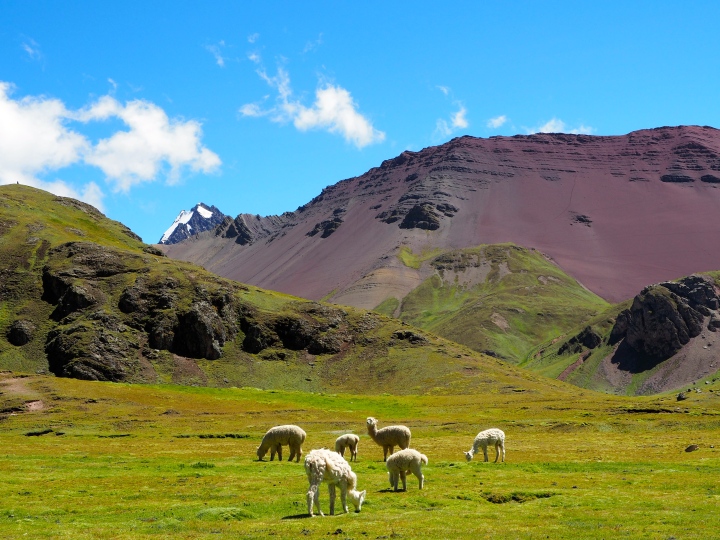 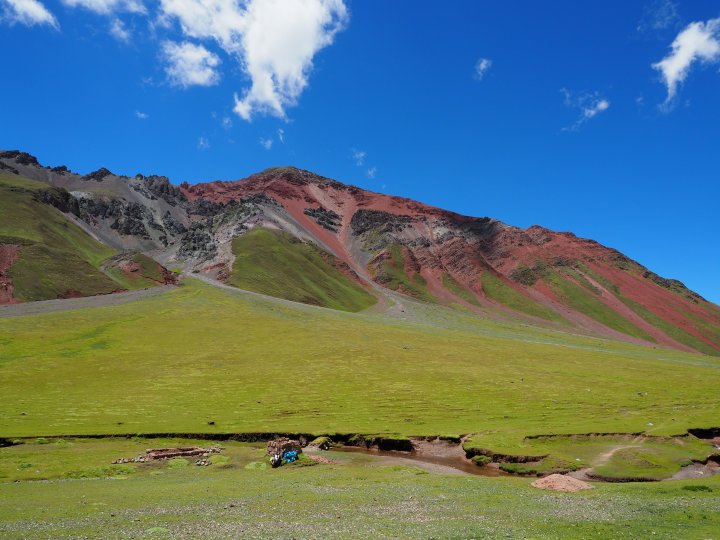 We passed through the valley and reached more of an incline, we were over half way to Rainbow Mountain but I knew this last slog would suck immensely. Telling myself to harden up I dragged behind my guide and the other guy Jason, stopping every few steps to catch my breath. We were nearing 5,000m above sea level, which is the highest I’ve ever been. Step by step we got closer to the mountain and I was in disbelief that the view could get better than it already was. By the time we reached the last ascent, I was ready to pass out from the altitude but the determination to make it there was too strong. Even though I was hiking with two men, I still wanted to get up there at the same time as them so I pushed on and reached the top. Breathless from the altitude and the view, I stood at the mirador and just grinned like an idiot. We’d made it!

The Rainbow Mountain was even better in real life. The different layers of colours were bright and distinct. The different hues of red shone in the sun and I couldn’t tear my eyes away. Still sucking in lungfuls of air, I suddenly had a burst of energy and when our guide said we could go higher for an even better view, I practically ran up the hill. Whatever issues I was having with the altitude disappeared as I leapt quickly up the hill to a higher viewing point where the impossible occurred – the view got even better! 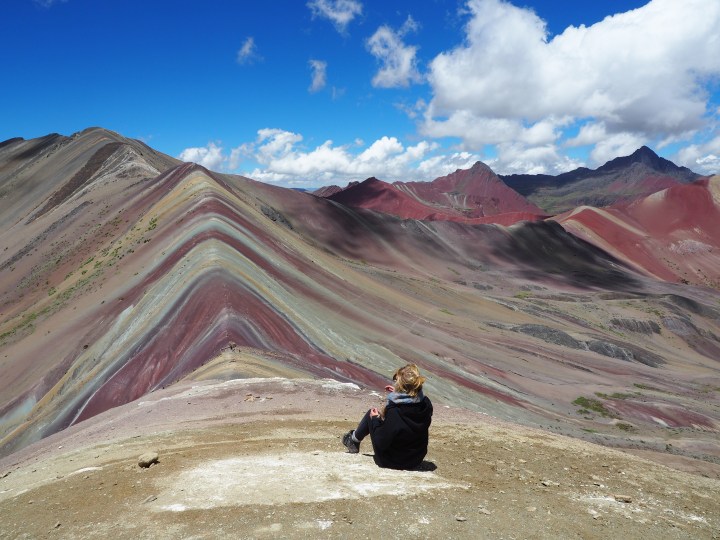 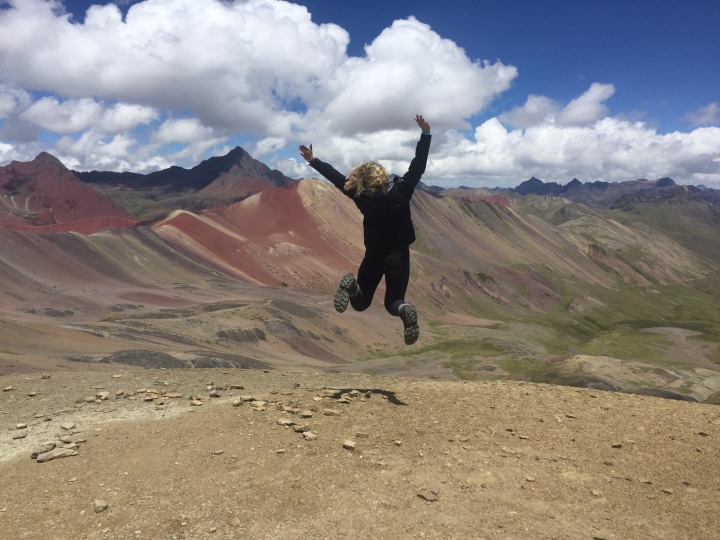 We had 360 degrees of Mother Nature’s hard work surrounding us. From the layered colours of Rainbow Mountain to the snowy peaks of Ausengate, it was definitely the most beautiful place I’ve been to and to have the entire place to ourselves was truly magical. Jason and I bounced around like idiots, exclaiming about the view and how awesome it was. Our guide must have thought we were complete nutters as we whooped and jumped around – a huge change from the wheezing, out of breath girl I was only half an hour earlier.

After taking a thousand photos we hiked back down to the mirador and had a snack before making the trek back. I was sad to leave; this place was too amazing to part with just yet. Luckily the entire hike back was absolutely stunning to look at and as we powered back down to a more pleasant level in altitude, I kept turning around to try and lock these views into my mind forever.

It took about an hour and a half to reach the starting point and by the end of it I was truly knackered. It had been a big day, not only physically but also mentally draining. The car ride back was a short one as I slept most of the way and before I knew it we were back in Cusco and into the hustle and bustle.

Tonight I’m catching a night bus to Puno where I’m going to explore Lake Titcaca and the floating islands. After being in Cusco for a month, I’m excited to get out and see some new things!

3 thoughts on “Hiking to Rainbow Mountain”