After a very solid sleep I woke to the sound of the waves crashing into each other across the road. I listened for awhile before jumping out of bed and grabbing my camera in the hope of catch some monster waves on film. The sky was a dreary grey and rain clouds threatened to let loose at any moment. So much for our sunny North Shore holiday!

I walked across the road and found a spot on the rocks not far from where the waves were coming in. They weren’t as huge as they sounded and had that same washing machine thing going on like they did yesterday. My images of Blue Crush type waves were shattered as dumper after dumper rolled in. I took a few snaps and was then forced inside by the incoming rain. It wasn’t heavy rain, just enough to be annoying.

I hustled the girls for some breakfast and we grabbed some goodies from the Foodland up the road and some malasadas from Ted’s Bakery and headed to Waimea Bay to watch the surf. Parked up on the hill, we sat on the Jeep and watched the waves smash into sand. It wasn’t a pleasant day at the ocean. However the malasadas from Ted’s were the bomb dig, and definitely not good for you. Basically they’re donuts, but five times better. We discussed plans for the day and decided to drive to Pearl Harbour because of the weather.

Jumping the Jeep we headed down the island towards the iconic landmark. Passing the Dole Pineapple Plantation, we stopped in for some touristy photos with the big pineapple before continuing on. We also got distracted by a Costco, which was a typical American thing to do. Running around the large warehouse, we giggled over the massive size of everything and all the random things you could buy. We mucked around the Costco for awhile, contemplating buying corn chips in bulk and whether a life size teddy bear will fit in our suitcase, before driving on to Pearl Harbour slightly behind schedule. 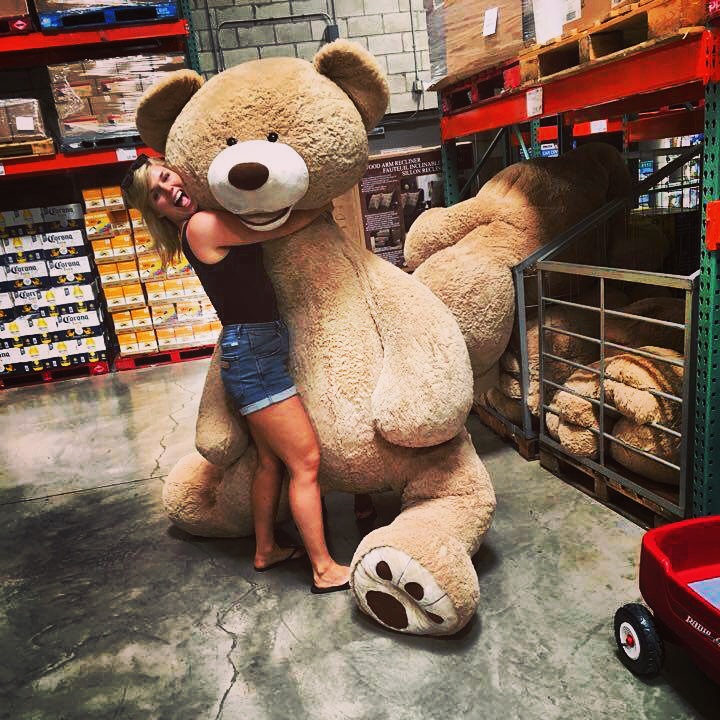 Pulling up at Pearl Harbour I have to admit I wasn’t that interested in it. Call me a heathen or ignorant or whatever you please but as an Australian, the Pearl Harbour incident was not huge on my radar. I haven’t even seen the movie. Nonetheless, this iconic site was a must-do in Hawaii and L really wanted to go so off we went. We were directed to the ticket booth where somehow we received free tickets to the Arizona Memorial. A bit stunned at the easiness of this, we were glad we hadn’t gone through the tour agent that was trying to sell us tickets for 40$ back in Waikiki!

We wandered around the grounds until it was time for our boat ride to the Arizona Memorial. First we had to watch a video about the history of Pearl Harbour. The 25-minute video was informative but not boring, it was actually really interesting to learn the history behind it all. After the video we were ushered onto a boat, which took us over to the Arizona Memorial. The white building in the middle of the bay stood out, as a reminder of the hardship and sadness that came with the event. Beneath the memorial you could still see the ship wreck now covered in coral, holding a lifetime of secrets. We stayed at the Memorial for a short time before we were ushered back onto the boat and back to the entrance. I was glad we went, it was nice to learn about some of America’s history and understand its effect on the country.

As we left the sky started to open up and we had to race to the Jeep, feeling like we were the girls of Baywatch, but probably looking like wet, soggy losers. Safe and dry in the car, we drove back to Haleiwa for lunch at a collection of food trucks where yet again I had garlic shrimp. This time however, I switched it up a little and got spicy garlic shrimp and boy were they not wrong! My mouth was on fire.. in a good way :p

After lunch we wandered around Haleiwa through all the galleries and boutique type shops. It was a cute, surfer town, which would have been much nicer if it wasn’t drizzling with rain. Giving up we headed back to the hostel to chill out for a while. Our travel plans keep us so busy that sometimes we forget to take breaks and relax, so it was nice to spend an hour or so just chilling out.

Of course, not long after our stomachs started to rumble again so we got ready for dinner and got in the Jeep to find some of the food trucks we saw on the drive over. Much to our dismay, most of them were shut for the night so after driving for about half an hour we ended back at the same food trucks we went to the night before. Still delicious, we had Thai and a beef brisket dish which was much yummier than I imagined. Totally satisfied we fell straight into bed from a food coma.

Hopefully the sun will show its face tomorrow and we can finally go find some turtles and catch some rays!