We made it to Greymouth with just enough daylight to suss out our free camping spot for the night. Using the Jucy app yet again (this thing was a lifesaver!) we found a secluded spot by the beach just outside the windy city. Greymouth itself wasn’t much to look at – it seemed like a bit of a middle class mining town. There wasn’t a lot of colour around and the dreary weather kept people indoors, making it seem almost ghost town-like. Deciding that our little camp spot would do the trick for the night, we jumped back in Mimi for a quick squiz at the Monteiths Brewery in the middle of town.

The Monteiths Brewery was a far cry from the dullness of its surroundings outside. Like a warm shining beacon of hope, we backtracked our initial thoughts of Greymouth a little and was impressed by the industrial-esque interior that made up the brewery. Monteith’s has been brewing for over 150 years and is the leader in New Zealand’s craft beer market. We were too late (no surprise) for a tour of the brewery but settled with a selection of brews to sample, while we warmed up by the roaring fire. I’m not a huge beer drinker but I sure do love a good cider, and if there is one cider I always fall back on, its a Monteith’s. Back in Aus, we get the usual apple and pear ciders but in the brewery I found a new love – ginger and pear cider. Mmm it was so darn good I could have bathed in it!

Heading back to our little camping spot, the wind was blowing an absolute gale and we were a little unsure of parking up here for the night. Deciding to park further from the beach than another lone camper, we reasoned that if the tide turned nasty on us, at least they’d get hit first. We settled in for a little dinner before dozing off into a beer-filled sleep.

The following morning I awoke early to Mimi swaying more than a crowd at a Bob Marley concert. It was still pitch black outside, making the swaying sound of the ocean even worse. Waking K up for consultation, we decided to move the van to a more covered area just further down from the beach where the swaying wasn’t so sea-sickness inducing. Fighting to get back to sleep for another half hour, I gave up and hustled K to go for a walk with me on the beach.

Now call me a beach snob because I come from a country thats home to some of the world’s best beaches, but Greymouth beaches are nothing to get excited over. The sand is dark and gritty, the water dirty and turbulent and the scattered driftwood makes walking in a straight line near impossible. Yet the darkness makes the beaches hauntingly beautiful. Like where you’d imagine a Lana Del Ray video to be made. It was depressing yet fascinating the way the knarly driftwood held a lifetime of secrets. The rain chased us back to the van and we decided to get moving straight away, while B and S were still dozing in the back.

Since we crossed the country yesterday, it seemed only logical to cross back over to the other side today. Our plans were sort of haphazard and all we knew was we wanted to be in the Marlborough region and Kaikoura for the rest of our trip. Driving along the wild and windy west coast was exciting and slightly terrifying. I’m not sure if its always so grey and dark on this side of the country but it was sure living up to its name.

We reached Punakaiki just in time for breakfast after zigzagging along the west coast for an hour or so. Punakaiki is home to the famous Pancake Rocks and Blowholes and we were hopeful we’d find some pancakes for breakfast and not be disappointed like we were in Kumara. Thankfully, the pancake Gods shone down on us this morning and we were in for a treat. Pancakes with bacon, berry compote and maple syrup, washed down with a coffee was pretty much exactly what the doctor ordered.

We finished off brekkie and went for a walk to the Pancake Rocks in a pathetic attempt to work off the calories we’d just consumed. The Pancake Rocks are heavily eroded limestone which over time has been formed by immense pressure by the rough sea on alternating hard and soft layers of marine creatures and plant sediments. These layers look like stacks of pancakes, hence the name ‘Pancake Rocks’. The walkway takes you past the rocks and blowholes and gives you up close views and perfect photo opportunities – which of course we took full advantage of! 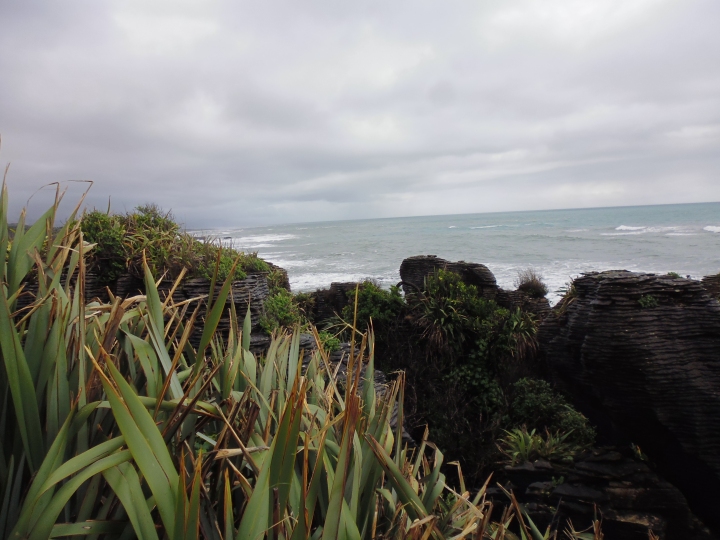 The deja vu I’d been feeling driving through Arthurs Pass was confirmed as I remembered looking at the strange rock formations with my parents about 10 years earlier. It was high tide the last time I was here and I remember Dad and I watching the huge waves crash into the rocks and water spouting out of the blowholes. Unfortunately we didn’t see the same performance this time round, but the rocks were still a fascinating sight to see!

As per usual, the clock was running against us and our mission to squeeze as much of New Zealand into one trip as possible was starting to look impossible. Never fear however, we didn’t let this beat us and we jumped back in Mimi for another windy drive towards Nelson.

There were a few stops along the way, but this day turned out to be massive, so I will continue our adventures in the next post!

2 thoughts on “Day 9 – A wild night at the beach and pancakes at Pancake Rocks.”