Just to catch up on the past week (which I will write more in depth about later), I have been residing in the hidden but glorious part of Turkey, known as Kabak Valley. Because I thought two weeks wasn’t long enough to spend in this fascinating country, and I wanted to get my moneys worth for my visa ($60USD for 3 months, whaaat!) I said goodbye to my gal K and caught the bus from Bodrum down to Fethiye.

Another two buses later and I was walking into my new home for the next two and a bit weeks – The Shambala. I found this little slice of paradise of http://www.workaway.com, where in exchange for a few hours work a day I get free food and board. Not bad right! Anyway, I will elaborate on my Workaway experience closer to the end of my time here.

Today however, after spending a few too many days lazing about in this little piece of heaven, I decided to do some exploring. There are some great waterfalls about an hours hike from Shambala, so with my free morning I decided to go and find them.

Now I’m admittedly not the best at directions. North and south mean absolutely nothing to me. I’m a landmark kinda navigator. However when every tree and damn rock looks the same, it was only expected of me to get lost.

I had some basic directions from the staff at Shambala and what I briefly Googled. I figured it couldn’t be that hard. Its a popular hiking trail, surely it must be like Australia and very clearly marked, right?

I started off around 9:30am, feeling fresh and good. I walked down to the beach and up to the cross roads, where the hiking paths begin. There was a signpost with three signs all pointing in different directions, all written in Turkish. I vaguely remembered something about the waterfalls being to the right so I took a punt and headed off in that direction. The rocky path, sometimes indicated by red and white spray painted stripes, led me uphill rather steeply, winding through bushes, over rocks and out of breath. I paused after about 15 minutes, searching for my next red and white striped indicator but couldn’t see anything. I continued along the path which was slowly becoming less and less established. 10 minutes later I hit a dead end. The beaten path just stopped, I didn’t know where to go next.

Sweaty, puffing like a overworked race horse and slightly worried, I tried several different directions that looked a little bit like a path but decided to turn back because I didn’t want to end up in ‘Castaway, The Sequel’. Walking back down, retracing my footsteps until I reached the crossroads, where I asked a Turkish woman which way to the waterfalls. Of course, like most elderly Turks, her English was very limited. With lots of nodding and hand gestures I was sent off in another direction, with hopes there was a waterfall at the end of the track. This track was more clearly marked, this time with red and yellow stripes, and I was feeling more optimistic. About ten minutes into my hiking, I met another hiker. A Turkish man, who certainly looked the part of the hiker exchanged greetings and he asked if I was headed for the waterfall. His English was just as bad as the lady before, so the hand gestures came out again, until we agreed we were both searching for these elusive waterfalls. 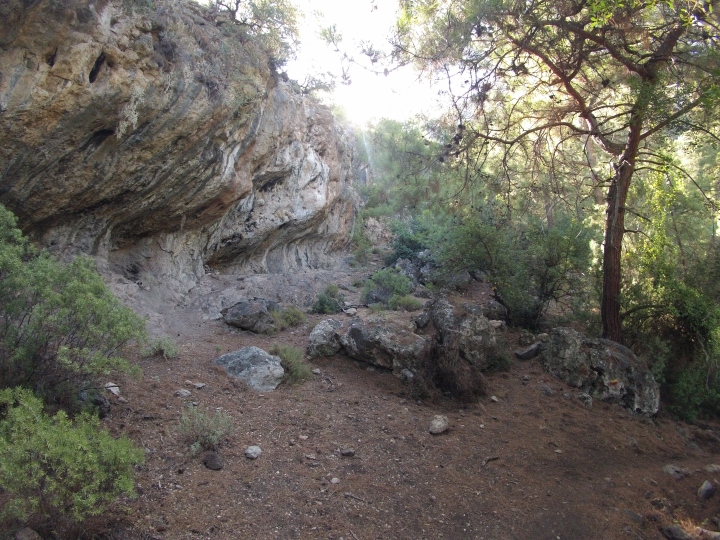 We hiked, him in front by about 20 metres, for awhile, clambering over rocks, in a steep ascent. By this time the sun was starting to really give it to us and the sweat was pouring out. We continued to hike uphill, and I was thinking this so called ‘moderately easy’ hike was severely underestimated. We walked along the edge of the mountain, only inches between our path and the rocky descent below. There is no such thing as safety railing in Turkey. If you want to be crazy and hike up a mountain, do it at your own risk! We reached the mountains corner, where we had a breather. The view was AMAZING.

The water below ranged from baby blue to aquamarine and the white pebbled beach glowed in the bright sunlight. Across the bay I could just see the wooden bungalows of Shambala, hidden amongst the green topped trees that clustered on the mountains edge. The severe white and grey mountain faces looked Photoshopped against the clear blue sky. Even though there were no waterfalls in sight, just seeing this view was enough for me.

We saw another sign post, with absolutely nothing indicating a waterfall. The Turkish man luckily had a mobile phone with reception. He called the camp site he was staying at and even with the lighting speed Turkish being spoken into the phone, I could tell we were in the wrong spot. Crestfallen, we decided to head back to the starting point.

After jumping down rocks, using trees to balance and walking slowly where path was slippery we eventually made it back to the starting point. I was almost ready to ditch the waterfalls and lay on the beach for the rest of the day. The Turkish man pointed in the direction of the camps and indicated waterfalls. He kept saying ‘Follow, follow’ and pointing towards the bush. I was a little hesitant to join him, every horror story of stranger danger flashing through my mind. I did want to see the waterfall though. .Sizing him and his skinny arms up, I reasoned that if worst comes to worst, I could definitely hold my own against him (sorry Mum). I let him walk ahead a bit, keeping an eye out for any big sticks.

We walked along what seemed like a dried out creek. Pebbles of all different sizes made for difficult walking, but it was nice not to be trekking in a severe ascent. We walked for 15 minutes or so, with me debating with my conscious as to whether I should turn and run. When suddenly we heard voices up ahead. Ah! At last, other people! And English speaking people, heading in the direction of the waterfalls! Feeling safer, we made some quick introductions and continued on our way. A funny group of Turkish, English and Australian, the six of us followed the red spray painted arrows, with hopes of a refreshing discovery. Of course, the way we were heading was the shorter, yet more dangerous way. Free rock climbing as they called it, we pulled ourselves up rocks, waded through creeks and ducked under trees, with hopes of getting closer and closer to our destination. I had taken my joggers off and found my bare feet were better than any shoes at climbing up rocks. Surprised at my strength, I easily climbed up rocks and feeling a bit like Bear Grylls, I got excited as the sound of rushing water was getting louder and louder.

Finally, after one particularly scary climb up a huge rock with not much to hold on, we reached the middle waterfall. These waterfalls were a set of several different terraces, with little ponds of crystal clear, icy cold fresh water. Ripping off my sweaty shirt and shorts I jumped into the frigid water, losing my breath at the sharp shock of coldness. It was so nice to be in fresh water after so long swimming in the sea. I felt clean and refreshed.

We hung about the waterfalls for awhile, chatting and laughing about our little adventure. There was another terrace higher up which the others wanted to climb to. I was running out of time, as I had to be back at Shambala for my shift. So after a long while, I pulled myself out of the fresh water, said goodbye to my new friends and headed back off to play Bear Grylls once again.

The climb back was equally as hard, as I had to jump down the rocks we had clambered up early. Thankful for all the push-ups I forced myself to do at the gym, I found it easy to use my arms to lower myself down, instead of just jumping onto the hard ground. I managed to find my way back to the campsites, with only a few moments of ‘where the hell am I?”

I reached the beach and bought myself an iced tea and bottle of water to quench my hard-earned thirst, before trekking up the steep hill to Shambala. I got back to my tent, exhausted but happy. I had found the waterfalls and met some lovely people. Just goes to show what happens when you trust a few strangers and don’t give up!

Next time, however, I’ll do a bit more research as to what way I need to go :p

3 thoughts on “Don’t Go Chasing Waterfalls.. Because you will get lost.”