Almost four years ago, my sister K and I went on a two month backpacking trip through South-East Asia. It was our first time travelling alone together, as well as our first time in Asia. We had many crazy and fun experiences but the one I’m about to share was my most memorable. Enjoy.

“Only seven hundred metres left to the summit!” Pingi, our sherpa exclaimed, with far too much excitement for four-thirty in the morning. The small man, about 50 years old, with bowed legs and a smile full of pearly white teeth, turned around and made sure none of our group of five had disappeared off the mountain’s edge.

Pingi grinned at us. “Small steps, everybody. Remember to hold the rope”

I glanced up at him with a smile. Ever since we met Pingi yesterday morning, he has pounded the ‘small steps’ advice into our weary, hiked out brains. I paused for a moment to look at my surroundings. We were standing on Mount Kinabalu in Borneo’s eastern state of Sabah at approximately 3,500m above sea level.  It was difficult to see what the view looked like because the sun was still settled below the horizon. My headlamp shone about two metres in front of me and I could see the granite rock surface that was smooth and steep, with spiky looking shrubs poking out of the rock crevices. The only indication of how much further to go was the line of headlamps further up the mountain of the eager climbers who started before us. I tried to count how many headlamps I could see but lost count after about twenty-five. The altitude was getting to me a bit. The dizziness which has set in around a kilometre ago was playing tricks on my eyes and I had to be extra careful where I trod.

“Remind me why we’re doing this again?” I asked my sister Kate behind me jokingly. “So much for Asia being all about beaches and sun-baking! Why didn’t we just go to Phuket?”

The four others in our group laughed, agreeing in unison. The climb to South East Asia’s highest mountain was known for being relatively easy, however my knees were begging to differ. I took a deep breath of the fresh mountain air and grabbed hold of the rope again – only six hundred metres to go.

We continued on in silence, concentrating on stepping carefully and using the thick, worn out rope to pull ourselves up the rocky surface. The sun started to slowly peek above the horizon and the mountain was becoming clearer to see. The summit – named Low’s Peak after British colonial administrator Hugh Low, who made the first recorded ascent of Mount Kinabalu’s summit plateau in March 1851 – was a couple of hundred metres away and up ahead, people were scrambling over the rocks, eager to witness the unique sunrise.

“Nearly there everybody, nearly there!” Pingi encouraged. He was still as chirpy as he was when we had met up this morning at 2:30am. I wondered if he had a special bed at Laban Rata, our accommodation half way up the mountain. Unlike the rest of us, he seemed as if he had a good nights sleep. It had taken us about five hours of steep climbing yesterday to get to Laban Rata, which is situated 3,272 metres above sea level and the sturdy wooden dormitory had looked like a haven for our sore bodies. We were fed a buffet of noodles and had a nightcap of creamy hot chocolate before retreating to bed at the respectable hour of 8:30pm. I felt like I hadn’t even fallen asleep when my alarm started to beep at 2am. I yawned and closed my eyes for a moment, trying to master the art of sleepwalking.

Pingi’s voice interrupted my daze and I realised sleepwalking probably wasn’t the safest way to climb a mountain. Encouraged by Pingi’s energy I persisted on, wondering how he does it – I guess after 37 years it becomes a habit.

Light was starting to fill the sky and the summit was becoming closer and closer. People were perched on the rocks, capturing the view on their cameras and watching the sun come further above the horizon. A rush of adrenaline burst through my body and suddenly my sore legs were forgotten. The  other Sherpas were helping us step over the rocky crevices and offering us words of encouragement in broken English. We pulled ourselves up the final part of the track where, at last we were officially standing on Low’s Peak. Weary from the trek but elated to have made it. 4,095m above sea level and feeling like we were on top of the world, Kate and I high-fived and laughed – we’d done it! I tried taking photos, but my Nikon point and shoot camera could hardly grasp the beauty of the scene that had unfolded in front of my eyes. The morning fog created an eerily spooky feel on the mountain and the clouds below us were fluffy to the point of being almost cartoon-like. Beyond the fog and clouds, the jungle sprawled on for miles and smaller mountains poked their heads above the clouds. The sun, which had now risen completely above the horizon, was hot and the previously cold air was now humid and sticky. Removing our various layers of clothes, we sat down and enjoyed the feeling of the sun on our skin while gushing over our accomplishment. The pain in my legs that I had felt before had disappeared and my face was fixed in a state of permanent grinning. Other groups had sat down near us and as I stared out at this incredible view, I couldn’t help but eavesdrop on their conversations.

“This feeling was similar to giving birth. All the pain and hard work is forgotten once you’ve reached the top!” A lady from another group nearby said. I couldn’t wholly agree with her statement as I had never given birth – but could relate to her analogy. Yesterdays and this morning’s climb had been wiped from my memory and had been replaced by a huge sense of pride.

We sat for a while, letting the view of the world down below us imprint themselves on our retinas and then began our trek downhill towards Laban Rata. We stepped lightly and quickly, the endorphins from reaching the top still flowing through our bodies. By late afternoon we had reached the base of the mountain and was greeted by a feast of Malaysian food and a hot shower.

As we packed our bags in preparation for the bus ride to our next stop just 40 kilometres away at Poring Hot Springs where we could soothe out hiked out legs in the natural hot springs for the next day or two, Kate asked me “So, better than Phuket?” I looked at her, let out a little laugh and put my backpack between my legs so I could zip it up – wincing as my tender thighs burned from squeezing my backpack shut.

“Absolutely!” I said breathless from trying to close my bag. Kate laughed and helped me zip up my overstuffed backpack.

We heaved our backpacks on and headed out to the minivan that would take us to our next destination. I looked up at Mt Kinabalu, who silently loomed over the lush green jungle.

“So much better than Phuket” I said, having one last look at the mountain we had just conquered before settling into the minivan. 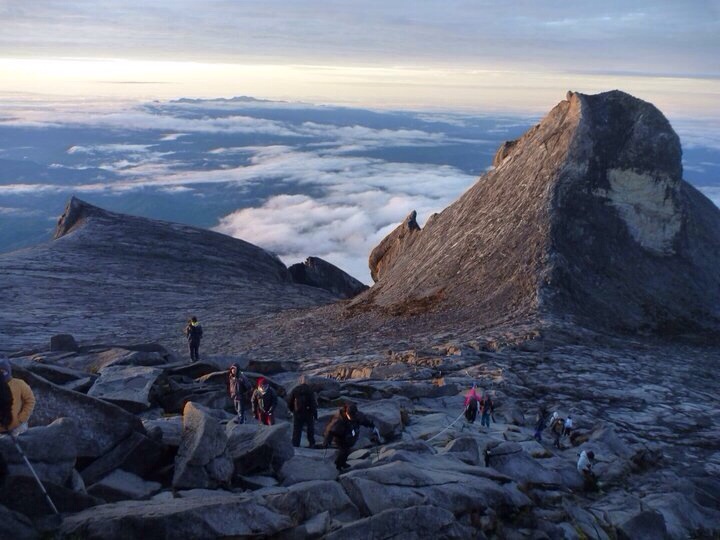 The climb to Low’s Peak. Using ropes to pull ourselves up.