On my very long list of things to do in my lifetime I’ve had experience St Patties Day in Ireland up there in the top part of the list. I mean, a national holiday that is devoted to drinking, in a nation where they take their drinking seriously, couldn’t not be an absolute blast. And, my friends – as I sit on my flight home with a ripper headache and seeing things with haze of green, I guarantee you that it was. Unfortunately due to St Patties Day being on a Monday and work conflicting, we could only visit for the weekend, missing the official St Patricks Day and the huge parade. Rookie error. Not to worry though, Ireland made a weekend of it so there was plenty of festivities for us to enjoy.

I arrived in Dublin on Friday evening and after a little wait I met my friend K and her friend P (who’s now my friend too – Facebook made it official!) and we caught the bus into the city. It was a short ride and by sheer luck and some rough directions we found our home for the night – the Dublin YHA. We dumped our bags and freshened up before heading into town for a squiz. My initial reaction of Dublin was it was a bit dirty and dull, though as we wandered further we realised we must be staying in the dodgy part of town and my first impressions were beginning to fade away. We stopped into the first pub we saw and instantly I was reminded of home. The warm atmosphere, a huge cider and comfy seats was a perfect introduction to the weekend and an indication of what was to come. I’ve never really been one for accents but listening to the Irish man sing and my fellow drinkers converse, I have to admit its grown on me – even if I can’t understand most of whats being said. We finished our drinks and moved on to another pub with fantastic music so we downed another cider and as the alcohol started to kick in our dancings shoes magically slipped on and wanted to boogie. We went a bit further and at a traffic light stop, P noticed people dancing upstairs from a lively bar and declared we had to be there. This place was packed full of sweaty, drunk people but the DJ was a killer and we grooved until we could groove no more. Around 3am we decided it was bedtime, but not before some sneaky sweet potato chips and a singalong on the walk home. Our quick drink before bed sure escalated rather quickly!

We woke the next morning with slightly sore heads and got ready for our day ahead. First stop was to find our next hostel which after a few wrong turns and pretty scary looking neighbourhood we finally found our next place. My Place Hostel was a nice little hostel and closer to the city centre than the previous night. We couldn’t check in just yet so we stored our bags and headed off into the city to explore. We intended to do a Sandemans Free walking tour so after the vital coffee stop we found the meeting place and got ready to see Dublin from a locals perspective. Our first was Dublin Castle, which didn’t really look like a castle, minus the large tower which was used to hold prisoners captive. We wandered through the castle and out to the gardens which were very pretty, all while our tour guide gave us a running history lesson on Dublin. Its terrible but my attention span was shorter than a goldfish so instead of listening to the tour guide I kept drifting off and watching everything happening around me. One strange thing I noticed was a man walking around with a sheep puppet under his arm. This guy didn’t look all there and was coming up to people and ‘baaaa-ing’ in their faces. I could tell he was making a beeline for us, being such a big group and of course just as our tour guide was telling is the history of the gardens, the strange man came and joined us. He was pretty weird and started hassling our tour guide who handled the situation very well,despite being heckled by this strange fellow. We weren’t sure whether a punch was going to get thrown but after some tense words the strange man ran off and we continued our tour. The gardens were so beautiful and we got distracted taking photos, losing our tour group in the process. We contemplated finding them again but decided we could easily do our own tour – we had a map, no worries! We walked down towards Christ Church Cathedral which was filled with little food stalls that looked way to delicious to pass up! We stuffed ourselves with a huge bratwurst and some baklava which well and truly killed the last remnants of our hangover and we set off again. We walked down one of the main streets, enjoying thesights before finding Temple Bar, which is a very hipster area filled with bars, pubs and vintage shops. We browsed around, making mental notes of where to go tonight as Temple Bar is one of the most popular places for nightlight and went further down to Trinity College, to have a few moments of relaxation in the sun. The afternoon was ticking on, so we got a cider from another pub before heading back to our hostel for a shower and preparation for the evening fun. 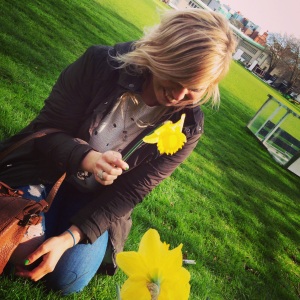 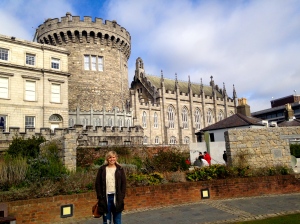 Decked out in our St Patties gear we headed back into town, getting stopped for photos and grabbing a sneaky expresso shot for energy before getting a quick dinner and getting amongst the fun. We realised that the footy was on so basically everyone in Dublin was glued to the TV screen, watching intensely as Ireland managed to win over France. Us three, being not really into rugby – especially as Australia wasn’t playing – took this opportunity to down a few pints of  cider and get on the same level as the others around us, who had been drinking since the early afternoon Wasn’t hard as the size of these pints were bloody huge, could of quenched the thirst of five people! We pub hopped around, meeting people from everywhere in the world and working on our Irish accents. We ventured into Temple Bar where first stop was the Bad Ass cafe, which was full of people in green and a band who kept playing my favourite (and only Irish song I know) ‘Galway Girl’, which prompted sing-alongs with some locals and bad dancing. Even tasted the famous Irish icon – Guinness, which I most definitely won’t be having again, yuck. We decided we were full enough to head into the actual Temple Bar – the most famous pub in Dublin one would say, which was absolutely chock-a-block full of people. We literally could not move but that didn’t stop us from dancing and having fun. We stayed for awhile and then moved on again, and again, and again until it felt like we visited every pub in Dublin! We called it a night when our eyes started to droop and the cider was getting harder to swallow so we walked home and I’m pretty sure I was asleep before my head even hit the pillow. Two thumbs up Dublin, I now know why you’re so famous for your drinking culture! 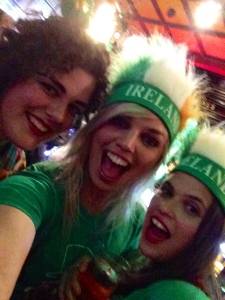 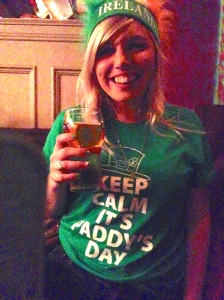 We woke pretty early the next morning despite the short amount of sleep and showered before finding some breakfast by the river. Unfortunately I had a midday flight so I had to take off while the girls could enjoy Dublin a bit more before flying out later that afternoon. We said our goodbyes – which wasn’t as sad as usual because I will hopefully be seeing the two of them in a couple of weeks when they come to Holland – and I caught the bus to the airport to be taken back to reality.

There is a certain satisfaction that comes with ticking something off your bucket list. While I didn’t get to see all of Dublin, I knowI’ll be back when the parentals come and visit in September so I wasn’t worried. I definitely think an Ireland visit on St Patties Day is a must for keen travellers or anybody with Irish blood (or who just like to drink!). The patriotism and love the Irish have for their little country is something you don’t see every day and the culture is just addictive. I almost wanted to claim myself as Irish, but I think my Scottish grandfather would’t be impressed! I arrived back in Holland with my green painted nails and my ‘Keep Calm its St Patties Day’ shirt tucked into my bag and if I could of jumped on the plane back to Dublin I would have – oh well, always next year!

2 thoughts on “Lets Get St Pattied!”